I was on my way back from an errand just now. As I walked from the store I was at to a bus stop, I passed Jerry. He wished me a good evening, and I returned the sentiment. As almost always happens after acknowledging the existence of people experiencing homelessness – something far, far too many people don’t do – he asked me if I had any change to spare. I stopped and I told him I had something much better for him. I have used camping gear that I am fairly certain I’ll not need again, and that it had been on my to do list for today to find someone who needed it. We were seven blocks from my apartment, and I had intended to take it to an encampment of people experiencing homelessness much nearer, so I said he’d have to come pick it up. I gave him some detail about what the equipment was, and he said he would pick it up.

He was pushing an overfilled and awkward basket. It was bulky and clumsy enough that it would obviously be awkward to get it down the five blocks of hill between there and home. I had only $1 in cash (not enough for a Muni ride), and he had no transfer. He said he would hide his things and walk there. I said I’d walk with him if he wanted some company and buy him dinner along the way. He said yes, and went off to hide his belongings. 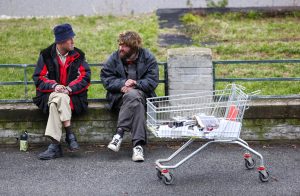 He came back about 10 minutes later. We started walking and I asked him where he wanted to eat. There are several McTacoKingJrWayFC places along the way, and he chose Burger King. We talked as we walked. I asked him how long he’d been experiencing homelessness. He told me about his story. He has been living on the streets for 21 years, since he was 17 years old. He was one of the not-so-lucky players of the Parent Lottery, and had some mental health issues. I asked him if he felt the City of San Francisco provided any helpful services. He felt they did, but that they could do more. No surprise there.

As we continued talking, he talked a lot about how he wanted very much to improve his life, get an education, and get off the streets. He felt he was capable and so close to being able to do it, but that he was stuck and needed some help. I asked him, “What is it that you need most to be successful in achieving your goals?” His answer? “Encouragement.” Stop and think about that. He didn’t say money, food, or shelter. What he needs most is some encouragement.

Recall from my first paragraph that I make a point to respond to anyone who greets me, regardless of who they are or what they look like. I do this because I believe that treating people experiencing homelessness in any way other than you would anyone else is a huge part of the problem. I choose rather to acknowledge them as human beings and give them basic courtesy and respect. This is regardless of someone’s current mental state, unless I feel threatened of course.

If you have some to help with, great. If not, you’ll soon find that saying, “Sorry, not today” doesn’t feel so awkward when you think about things from a different perspective. When I answer, “not today,” I view it as continuing to respect people experiencing homelessness. The fact is very few of us can afford to give away everything in our wallets. Do I have cash? Maybe. Am I throttling the amount I use to help others to protect my own budget? Absolutely. I asked Jerry what he thought about people saying no even if they had cash. He’s become used to it, and it doesn’t bother him acutely as each person says it. There is a chronic element though. It takes its toll. Jerry agreed with me that, over the long run, acknowledging him and saying no would be easier for him.

I continued the conversation. I told him I wanted to have something that I could keep two or three of in my pocket that would be helpful to some I came across that needed some assistance. The list was also not what I expected. Hand sanitizer is huge. It can be used as a sanitary agent and a cooking gel. Many people don’t know basic survival skills such as how to properly shield from the elements, so a small booklet describing that is another unexpected one.

He picked up several items of food and a couple bottles of juice we saw as we walked. If one wants to leave food for people who need it, leaving the items on top of a trash can signal to people that the food is edible. If there are no trash cans, food left on a street corner is another way to signal the same.

We arrived at Burger King and got some food. From there it was a three walk back to my apartment, and the conversation lightened up. He waited outside (he preferred it to lobby) until I came down with the equipment. We said parting words, shook hands, and went our separate ways.