On November 8th, 2014, I was involved in a serious motorcycle crash. Over three months later, my journey of recovery is underway, and there is likely still more road ahead of me than there is behind me. Several of my friends have suggested I share my story along with the coping techniques I have learned, so that others in a similar situation can benefit from what I have learned so far through my experiences.

In this first post of a series of posts about trauma and recovery, I will share the details of my crash.

I left home at about 10:30 AM on Saturday, November 8th, 2014. My motorcycle had been sitting unused in the garage for almost 6 weeks and I decided to take it out to keep everything moving smoothly and recharge the battery. I rode the bike a couple of miles from home, and entered US highway 101 in downtown San Francisco.

The next thing I remembered happening was sliding out of a machine, and asking if I had just had a CT scan. “You’ve had several CT scans,” was the response I heard. I had been in an accident and it was not until I was told the details that I knew what had happened.

Shortly after merging onto the freeway, I somehow had been forced into the side rail. Highway 101 is elevated through San Francisco, and while my bike had remained on the freeway, my body did not. It flew off of the elevated freeway, and I landed 5 stories below on a parked car. I was rushed by ambulance to San Francisco General Hospital.

I was critically injured. I had been given six units of blood. Both of my femurs and kneecaps were badly injured. I had broken my left femur in three different places. My right femur had been crushed and destroyed just above the kneecap, and the bone had broken through the skin and was protruding from my leg. My right kneecap was completely destroyed, and my left on had been seriously damaged and broken in several places. I had several broken ribs, a collapsed left lung, and a broken right shoulder. My skull had sustained multiple fractures and breaks around my eye sockets and nose. I had a serious concussion. It is a wonder that I survived, that I had no spinal damage, and no brain damage.

Over the next 21 days, I underwent seven surgeries: two on each leg, two on my face, and one on my shoulder. A metal rod was inserted into my left femur and screws were used to hold the kneecap in place. My right kneecap was replaced and the destroyed section of bone was temporarily replaced with a metal cylinder and a substance the surgeon described as “concrete-like.” My nose required two reconstructive plastic surgeries, and steel plates were inserted under my eyes to keep them in place, My shoulder had a number of plates and screws holding it together. 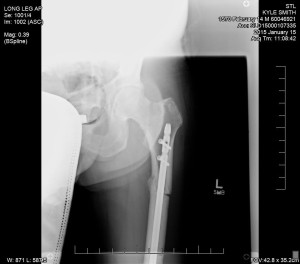 My left leg. The rod is inside of the bone. 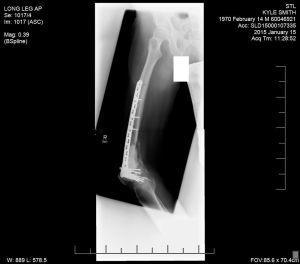 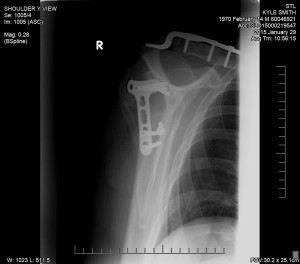 I spent five weeks in San Francisco General, and 11 weeks in a skilled nursing facility. I have been home for five weeks. My recovery is progressing well. I can now bend both knees to about 85 degrees, and can raise my shoulder to about 70 degrees. My face has healed, although much of it still lacks feeling, and the scars are barely noticeable. I only began taking my first steps with a walker last week. Walking from my bedroom to the living room exhausts me. I will eventually make a full recovery.