It took 835 days of recovery from my crash to run again. I had been yearning to run for months. I had tried more than once.

On the day I ran, I was going back to my apartment with my husband because he had forgotten his umbrella. He was in a hurry to catch the metro and ran towards the apartment. Without thinking about it too much, I started running after him. It was a profound experience. After he left, I sat down in a chair, and I started to cry. I could (and perhaps one day will) write an entire post on the joy and gratitude I felt that caused the tears. Today, however, I want to write about another thought I had as I reflected on what had happened. 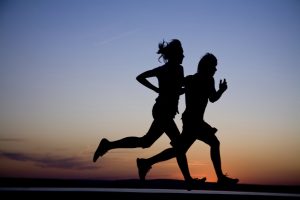 I realized what was most profoundly different that day compared to the other days I had tried to run. I didn’t have the intense feeling of fear I had experienced in previous attempts. In that moment, with my fear of falling gone, I was able to run. Letting go of that fear – mostly because I acted in the moment – was the key to achieving a new milestone in my recovery.

I pondered how important the fear factor is in a toddler learning to run. Toddlers typically learn to run between that age of 18 to 24 months. Toddlers do feel fear, framed in the perspective of risk taking when they learn motor skills (which presumably includes running)1. They decide whether to take a risk or not on a much more simplified basis than do adults. They assess the probability of falling, but not the severity of the potential fall2.

All of this drew a parallel to some advice I was given by a career mentor. He told me this as I was reaching the Principal level at Microsoft. To paraphrase, “There comes a point in your career where you have to be willing to get fired for something you believe in.” I learned about 1/3 of that lesson from him. I gained another 1/3 by applying the concept in my career. I learned the final 1/3 the day I ran.

Think about how that relates to the study of toddlers and how probability of failure, but not severity of consequences, applies to being bold and taking smart risks in your career. Toddlers can’t learn new motor skills without taking risk. We can’t move forward in our careers without failing and getting those lessons under our belt. It’s how we learn and grow.

When you’re trying to decide if you should take a bold, calculated risk, act like a toddler. Go with a high probability of success and don’t let the severity of the consequences of failure stop you. Let go of your fear, and run.